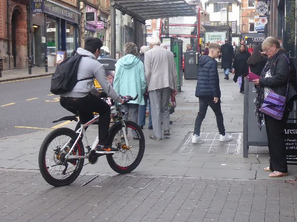 Stop Cycling on Pavements in Walton Town Centre!
Local police sergeant Rob Thomas contacted WoTTA for help to stop the recent dramatic increase of 12-15 year olds cycling on pavements in Walton Town Centre and associated anti-social behaviour. To do this the police would like to  extend the powers of the PSPO to include cycling on pavements and to start from midday rather than 3pm.

The only way the PSPO can be extended in this way is if the police get enough reports of this kind of behaviour. Unfortunately, as WoTTA has noticed in the past, many people have lost faith in reporting these sorts of crime, as they often only get an email giving them a crime number but stating that there aren't enough resources to investigate the crime.  However, without enough of these crimes reported, the police won't get further resources for Walton.

To resolve this, WoTTA agreed to do what we did to get the PSPO in the first place - also collate evidence of crimes and launch a social media campaign promoting reporting.

To keep this as simple as possible, we'd like anyone who reports a crime to then forward us the email they receive back from the police. That way we can also be gathering a complete picture of what's going on in Walton, support the police and make our town safe. Report the crime via calling 101 or online on the police website : REPORT A CRIME Once you receive your crime number back from the police, forward that email to us at : contact.wotta@gmail.com 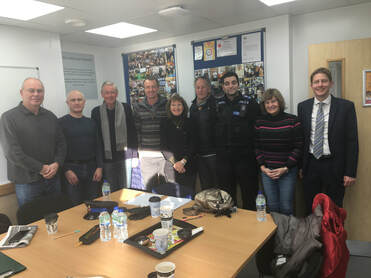 January 2019 - Latest on the Public Space Protection Order
The PSPO has been in place since February 2018. It was initially organised to run for a 12 month period. EBC and the police are now gathering feedback and making a decision as to whether the time period should be extended for a further 24 months. To that end WoTTA organised a meeting for local businesses and residents groups to report their feedback to the police, held in McDonald's offices. They also helped police collect statements from businesses unable to attend. The feedback was overwhelmingly in favour of extending the PSPO with reports across the board of reductions in ASB since it came into force. No one present wanted to lose the momentum we have gained in the past 12 months and potentially revert to the extensive problems we were seeing at that time. EBC will send out letters to all residences inside the PSPO area asking for feedback.

Other local businesses are invited to comment by emailing: communitysafety@elmbridge.gov.uk 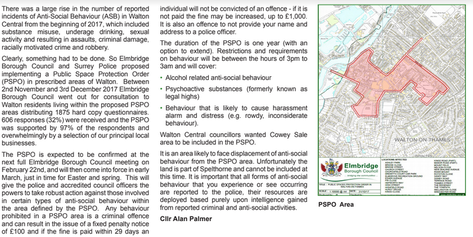 February 2018 - Public Space Protection Order Starts!
Great to have a successful result of all our hard work on ASB and making Walton a better place to live and work! Here's a report from Walton Society about the results of the survey:

Following on from our successful campaign to stop ASB in Walton, EBC have now launched their public consultation on the proposed PSPO.  As many people as possible need to complete this very short survey. Please pass this on to others.

From EBC:
Residents and businesses have an opportunity to respond to a consultation regarding a Public Spaces Protection Order in Walton Town Centre.  From the beginning of 2017, Surrey Police has received numerous reports regarding anti-social behaviour in Walton-on-Thames Town Centre. It has been reported that there is evidence of substance misuse, underage drinking, and sexual activity where these groups have been gathering, which has led to assaults, criminal damage and racially motivated crime and robbery for example.  As a result, Elmbridge Borough Council is considering a Public Spaces Protection Order (PSPO) for a specified area of Walton-on-Thames as this behaviour is having or is likely to have a detrimental effect on those living in that area.

Part of the process for implementing a PSPO requires public consultation on the proposed restrictions and requirements. The responses from this consultation, along with other evidence, will be considered by Cabinet and Council in the New Year.  The consultation on the PSPO will be open between 2 November and 3 December 2017. For those who live, work and visit Walton-on-Thames, you can respond using the online survey. Please note, the consultation is subject to a period of extension should it be felt that further evidence is required.

Councillor Mary Marshall, Portfolio Holder for Community and Corporate Development says; “Consultation on a PSPO is key and we are encouraging open discussion as part of the consultation process to identify how best to balance the interests of different groups – both those affected by anti-social behaviour and those who will be restricted by the terms of the Order – it is a chance to explore whether there may be unintended consequences from the proposals. We will be consulting with residents, local businesses and landowners as part of the consultation process.

Surrey Police Temporary Inspector Greg Turner says; “For some time now we have been receiving reports of unreasonable and persistent anti-social behaviour in Walton which is having or likely to have a detrimental effect on those living in the town. We would encourage people to consult on the PSPO which is designed to stop individuals or groups committing anti-social behaviour in a public place by restricting certain types of behaviour.”
September 2017 - Action by Joint Action Group
Good news! Action has been taken by the JAG on Walton and the issues we've been facing with ASB. Read the full report and proposal regarding a PSPO (Public Space Protection Order) via the file below. In short, EBC Cabinet will decide on 21st Sept if a public consultation will be undertaken. If so it will be done via an online Snapsurvey from 25/9/17-23/10/17. Then the proposal and results of the consultation will go to EBC Cabinet to be resolved on 15/11/17.  If and when the survey goes live, as many people as possible need to fill it in! We'll keep you posted...