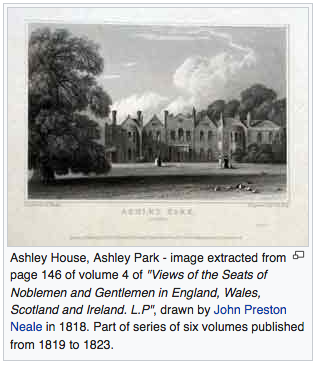 .In old writings, Ashley Manor is recorded originally as Asshlees or Asheley.  The first records are dated 1433, when it was in the hands of Joan - widow of Robert Constable - who held it of the Crown. This was a relatively small manor measured at 16.5 acres (0.067 km2) at its earliest but was later extended. It is believed to have been mainly woodland with some lawns and fields. The manor was one of those incorporated into set of manors (the 'honour') of Hampton Court under the passing of the Hampton Court Manors or Manors of Hampton Court Act, 1539.

The construction of the first properly documented "Ashley House" was by Lady Jane Berkeley in 1602-5 and it was altered over the centuries until demolition between 1920 and 1925.  Ashley Manor escheated to the Crown before and after Berkeley's ownership as was common of many manorial estates in that period.

Tenancy of the manor and Walton Lee and Walton Meads were granted  by James I of England to Henry Gibb in 1625 and described with the lands belonging to King Henry 8th, and annexed to Hampton Court. It was subsequently granted by letters to Roger Yonge, by King Edward 6th. Queen Elizabeth and King James I made similar grants to several parties.

In the reign of King James I, Ashley was the seat of Christopher Villiers, Earl of Anglesea, a younger brother of the Duke of Buckingham. He died in 1624. Charles, his son, married but died without an heir in 1659, at which time Ashley Park was the residence of his grandmother, the Countess, who had remarried Benjamin Weston.. The Countess died on April 12th 1662 and was interred in a vault belonging to the estate, in St Mary's Church, Walton.

In 1669, Lord Henry Arundell lived here, followed by Sir Walter Clarges, and others until Sir Richard Pyne (Lord Chief Justice of Ireland). It was purchased from him in 1718 by Richard Boyle, Viscount Shannon. He died here in December 1740, and was also buried in Walton church and where a Roubiliac monument was erected to his memory. It's still there today and well worth a visit. Read all about ST MARY'S.

Grace Boyle, his daughter and heiress, was married to Charles Sackville, Earl of Middlsex. She died before her husband, in 1763, and bequeathed the estate to her cousin, Col. John Stephenson. After his death, in 1786, it came into the possession of Sir Henry Fletcher, the maternal nephew of the Countess of Middlesex. He was created a Baronet on 20th May 1782, was MP for Cumberland for 40 years and died in April 1807, also buried in St Mary's church.  He was succeeded by his son, Sir Henry, who died on 10th August 1821. The property stayed in his family until it was bought by Sassoon David Sassoon (British businessman, banker and philanthropist.) shortly before his death in 1867; his grandson Sassoon Joseph Sassoon and young family were the final owners of the house. It was demolished between 1920-1925


Taken from: A Topographical History of Surrey, by E.W. Brayley assisted by J. Britton and https://en.wikipedia.org/wiki/Ashley_Park 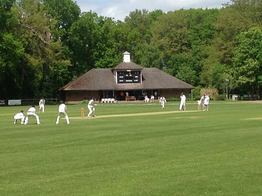