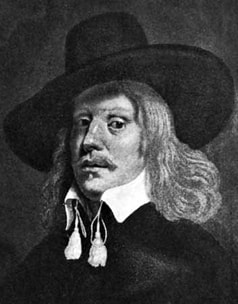 John Bradshaw (15 July 1602 – 31 October 1659) was an English judge who lived in the Manor House in the 17th Century. He was first Lord President of the Council of State of the English Commonwealth but was most notable for his role as President of the High Court of Justice for the trial of King Charles I, authorising his beheading in 1649,

Local legend has it that the death warrant of Charles I was actually signed at the Old Manor House, as Bradshaw – who, as President of the High Court of Justice, had declared Charles I ‘Tyrant, Traitor, Murderer, and a public enemy’ – was leasing the property at the time. Bradshaw’s fellow signatory on the warrant, Oliver Cromwell, lived in nearby Ashley Park.

It’s called the Old Manor House, but an alternative name might be the Old Executioners’ House – because a few years later the 700-year-old property was also the home of  ‘hanging judge Jeffreys' George Jeffreys, 1st Baron Jeffreys of Wem, PC (15 May 1645 – 18 April 1689) who sentenced dozens to death for treason.