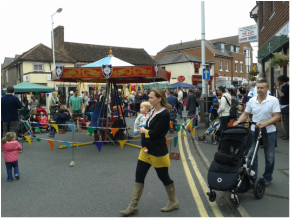 ​We are looking into organising the Goose Fayre in Bridge Street again, but cannot do it without the help of local businesses and volunteers. Please get in touch if you want to help this event happen or are interested in sponsorship opportunites.  Thanks!

History of the Tudor Goose Fayre:

“In 1516 Henry VIII granted licence to Robert Nortriche and William Fleyter, constables, and the inhabitants of Walton on Thames, to hold a fair on Tuesday and Wednesday in Easter week and another on 3 and 4 October in each year.(fn. 10) In 1601 a complaint was made of the increase in the number of vagrants in Surrey; it was reported that at the Easter week fair at Walton no less than eighteen such vagabonds assembled together, and were heard engaging in treasonable talk about the death of the Earl of Essex, (fn. 11) who had been beheaded for high treason a few weeks earlier.”

The fair continued the be held right up to 1878 and was reinstated in 2013 by the Walton Business Group.