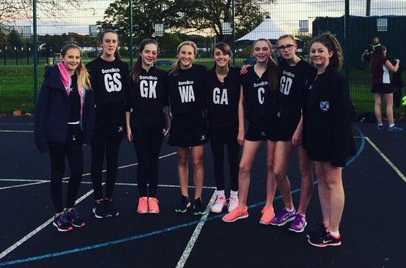 The Year 9 Netball team from Rydens are looking forward to a County final appearance to round off what has been a long, injury ridden season for the team!

Abbie Bainbridge said “After a long season and a lot of effort our work has finally paid off.  All season we have all shown commitment to our netball, arriving early to school at 7.25am to train each week!”, continuing that “this was really challenging during the winter months but with the support of our coach Maggie (Cobham Netball club) we have been able to practise a range of netball skills which has helped us to improve as a team and individually.”
Team mate Aimee Boxall backed up Abbie by saying “The coaching and effort has enabled us to excel this season and win all our matches in our league despite a number of injuries within our team”. Smiling with pride she concluded “Our hard work has resulted in us being given the opportunity to play in the Surrey County Finals which we are so excited and proud about as it will give us the opportunity to do our best as a team and represent our school, RES.”  We wish the team all the very best in the County Finals and hope to hear more about continued success.